My current research examines the population dynamics and early ontogeny of the symbioses between the dinoflagellate Symbiodinium spp. and cnidarian hosts such as coral. Knowledge of how Symbiodinium populations within scleractinians and octocorals are established and understanding how flexible these symbioses are in response to environmental perturbations is essential to understanding host and symbiont distribution patterns, and the processes that are critical to maintaining a viable symbiosis.

Phenomena such as coral bleaching (the loss of algal symbionts or algal pigments) and the effects of global climate change on reef corals are fundamentally questions about the interaction of host and symbiont, and the studies we are conducting are crucial to our understanding of these larger questions. 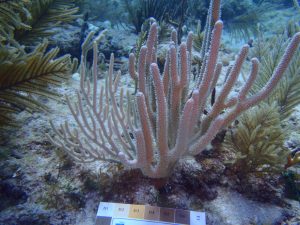 Coral bleaching has been an important component of the dynamics on coral reefs for the past 3 decades. Although a great deal is known about bleaching among scleractinian corals, virtually nothing is known of this phenomenon among octocorals. As scleractinian abundance is declining, the relative abundance of octocorals has remained more constant. Part of that success is likely due to a seemingly lower sensitivity of these cnidarians to bleaching conditions. However, the contrast in octocoral bleaching between the 20th century events and those of more recent years suggests that thermal events of increasing frequency and/or intensity will affect octocorals as well and that octocoral sensitivity does vary between species. To project how octocoral communities will fare as SST increase, requires a greater understanding of variation in their sensitivity to bleaching and the basis of that variation. To this end, my lab is examining symbiont variation within octocoral species before, during and after a predicted bleaching event and to compare symbiont type with bleaching susceptibility. Understanding the dynamics of octocoral bleaching is important. If octocorals are more resistant to bleaching, this may explain observations of increasing abundance. As coral cover declines, these species represent more of the living cover and are often the visually dominant organism on reefs. Furthermore, octocorals are fast growing and have the potential to colonize open space and help to stabilize the ecosystem by providing habitat for other reef organisms. 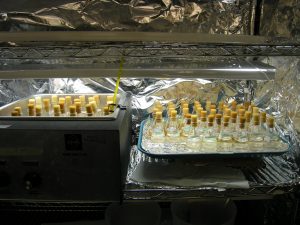 In this project we are investigating the genetic diversity of Symbiodinium within the host species (Antillogoria bipinnata) and the potential for the symbiont to evolve in response to temperature. Specifically, we are examining how genetic variation within a symbiont species (Symbiodinium antillogorgium) affects symbiont performance in culture and in the host and how this affects the response of the holobiont to increased temperature. Further, the project examines whether holobiont response to increased temperature associated with climate change depends on particular host-symbiont combinations. These experiments provide a first step in predicting whether invertebrate hosts on coral reefs will respond to global change via adaptation of their symbionts. 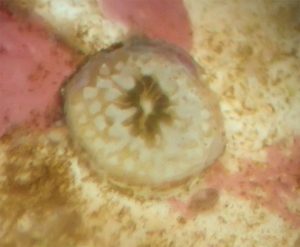 The symbiotic relationship between dinoflagellate algae of the genus Symbiodinium and corals forms the base of the tropical reef ecosystem. Yet, despite their importance to the host, the majority of these symbionts are horizontally transmitted. Although many studies have examined symbiont diversity in adult corals, fewer studies have examined the dynamics of the early symbiosis and what factors might affect the symbiont community in new recruits. In collaboration with researchers at Mote Tropical Research Laboratory (https://mote.org/locations/details/tropical-research-laboratory) and Keys Marine Laboratory (http://www.keysmarinelab.org/), we have been following symbiont uptake in the restoration target species, Orbicella faveolata and Acropora palmata recruits under both laboratory and field conditions.

Host-Symbiont Coevolution in the family Gorgoniidae 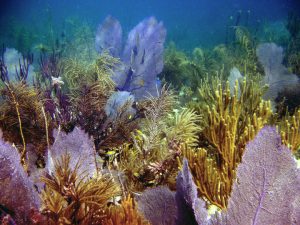 Members of the octocoral family Gorgoniidae form obligate symbioses with dinoflagellates belonging to the genus Symbiodinium yet many aspects of this symbiotic relationship between host and symbiont are unclear. Studies have demonstrated that the relationship between the host and symbiont is very specific, suggesting that these symbioses may be result of past coevolution events. In such a case, we would predict a congruency between host and symbiont phylogenies. To examine this hypothesis, we are examining the phylogenies of host and their symbionts within the family Gorgoniidae using highly resolved molecular marker to help to clarify the specificity in the symbioses, potentially leading to evidence of coevolution.